Beat (Comic) to the Rhyme 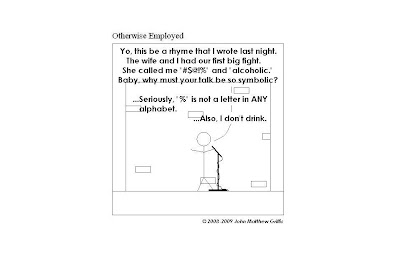 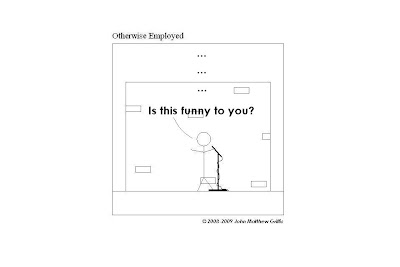 ...You know, I had a storyline, brief though it was, in mind - and, indeed, in action - when I lost my, er, how should I say it, "gusto," all those months ago. I could finish it now; I will not, for the same reason that I didn't back then, which is that it's not really that interesting or funny. Actually that's how I feel about the whole comic, so far. That's OK - if I'm honest with myself, and I hope I usually am, the comic in its beginnings was more a form of catharsis than anything else; I vented my rage at what I perceived as just a few of the idiocies of the world, and I had fun doing it, which isn't a bad deal as long as one doesn't wake up in jail the following morning. Manhunts are also good to avoid. I tried to make it humorous and if anyone ever laughed or even smiled I'm glad, but really it was a comic for me, and ultimately even I didn't find it as funny as it was in my head. So I lost interest, as so many others have done. With their own comics, too.

Well, I also made the mistake of reading loads of good webcomics, which made me realize that if I really wanted to deliver a quality product to people who want it, I would have to spend extensive time and effort studying storytelling and drawing and possibly comedy. These are all good things to know, but it could be some time before I can even begin to seek that knowledge. In the meantime, here I am. The reason I'm back now is because I did really enjoy making that comic, even though it took a lot of time and was not as great in the delivery as I'd hoped. As I've expressed in my blog and as hardly needs to be told to this web-centered generation, making things is fun, especially when one can put it on the Internet where people might see it and might even read it. Accidents do happen. Gives one a feeling of professionalism, of "Being Published," of the pride of creation and distribution. Not wishing to abandon that forever, I have decided to give this another go, but as the title of the posting might indicate, in a slightly-different manner. I don't have as much time as I did before and neither do I have the same all-consuming subject matter, for which I am very, very grateful. I doubt I'm going to become a webcomic sensation any time ever, so why worry about things like mass appeal and humor for others? I made a comic that was truly for me but I pretended it was otherwise before; no longer. Combine this with my time constraints and what results is this new one-panel approach with bits of surreal and pun-filled humor that amuses me and probably will confuse or bore others. That's fine. It's a comic for me, as I eke out my own little space, my own few strands of this great Web. (Who, incidentally, is the spider? SkyNet?)

But if there is anyone who does get a laugh out of these, that pleases me to no end. Bringing joy to others is among the most potent natural highs.
Posted by Mathias at 6:37 PM No comments: